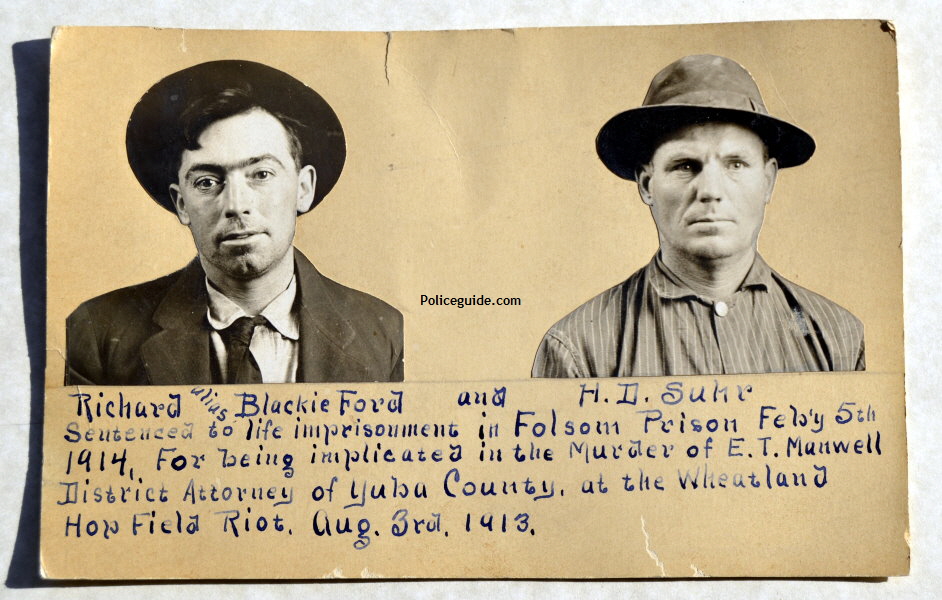 From the scrap book of Charles J. McCoy, a gift from Loleta Richardson 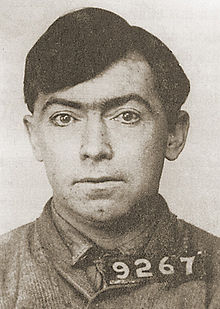 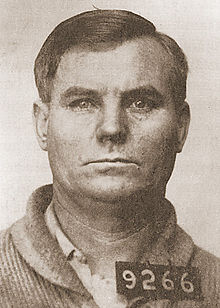 Tragic Results of I. W. W. Agitation in the Hop-fields

On Sunday evening, August 3, 1913, the people of Marysville were startled by
news from Wheatland, twelve miles south, that Edward T. Manwell, district
attorney of Yuba County, had lost his life, that Sheriff George H. Voss had been
mortally wounded and that a deputy sheriff named Thomas Riordan had been killed,
as the result of an I. W. W. agitation in the camp of the hop-pickers on the
Durst Brothers' place, which adjoined Wheatland. Citizens, aided by the police,
at once formed relief parties, and these parties hastened, armed, to the scene.
Coroner J. K. Kelly and his deputies, with City Marshal C. J. McCoy, now
sheriff, were among the first to arrive at Wheatland, where they found the
residents terrorized by the awful events of the afternoon.

Investigation proved that the trouble in the hop-fields had been brewing for
several days. Agents of the I. W. W. had worked, in their usual way, to cause
the men and women employed by Durst Brothers to become dissatisfied with their
wage and with camp conditions as regarded sanitation and other matters. On the
clay prior to the murder of the district attorney and the attack upon the
sheriff, a committee headed by the leaders of the I. W. W. contingent had waited
upon R. H. Durst of Durst Brothers with a written demand for an increase in the
pickers' rates, for movable toilets in the field, for separate toilets for the
women, for "high-pole" men, for lemonade made from lemons instead of acid, for
the delivery of drinking water in the field twice a day, and for a committee
from the pickers to inspect the hops and pass on them. Early in the morning of
the fatal day, a second visit was paid Durst by the committee. Durst accepted
some of the terms and vetoed others, chiefly the demand for increased pay,
saying he would continue to pay the wages generally paid in California by
growers of hops.

Durst visited Wheatland, and without swearing to a complaint, demanded that
Constable Lee Anderson arrest the leader of the strikers. Complying with Durst's
request, Anderson went to the field and attempted to arrest the man pointed out
by Durst. The reception given Anderson was a rough one, Anderson having
confessed that he did not have a warrant of arrest. Returning to Wheatland, he
had a complaint drawn. Armed with a warrant, he now made another attempt to
arrest the leader. This time he received a reception even warmer than the first.
In the scrimmage, in which women pickers as well as men participated, Anderson
was wounded in the arm, and was fortunate to escape with his life.

Again repairing to Wheatland, Anderson notified Sheriff G. H. Voss over the
phone of the conditions, and advised immediate action. The sheriff assembled
several deputies in Marysville, among them the man Riordan, whom he knew to be
fearless, and proceeded to Wheatland. Arriving there, he was met by District
Attorney Manwell, who had spent the day in Wheatland on legal business. Manwell
volunteered to accompany the posse to the scene of the trouble.

On their arrival at the hop-fields, the officers found that an indignation
meeting was in progress, with one man perched on a box in the center of a dance
platform, making a speech of an incendiary character. Making his way through the
crowd, Manwell sought the cause for the gathering. As he did so the strikers
surged around him, and about the sheriff and his deputies. In the excitement, a
portion of the platform broke down, as did the box the speaker was standing
upon. This seemed to intensify the bad blood among the rioters. As Manwell stood
with his arm upraised, and with cigar in hand, appealing to the strikers to
"keep the peace," he was shot down, and died almost instantly.

The rioters then turned their attention to the other "Scissorsville
officers," this being the term by which the leader had referred to the sheriff
and others in his speech before their arrival. Sheriff Voss was next attacked. A
large Porto Rican among the strikers secured the sheriff's club, and was beating
him over the head with it when Deputy Sheriff Henry Daken, a resident of
Wheatland, unloaded one barrel of his shotgun into the back of Voss' assailant,
killing him instantly. Just who shot the man Riordan was never learned with
certainty.

After killing the Porto Rican, Deputy Sheriff Daken was compelled to shoot
another man, a Mexican, in the hand. His gun was then empty, and he was forced
to flee the mob. He arrived at the store building pursued by about twenty of the
rioters. Taking a position behind the counter, after the doors were locked, he
exchanged his clothing for other garments provided him, and shaved off his
moustache. Thus disguised, he was able peaceably to retreat from the building
toward evening, after the mob had threatened to burn the place. Daken was later
the principal witness at the trial of the murderers of District Attorney
Manwell. But for the work of Daken, the horde probably would have murdered every
one of the sheriff's deputies.

The unfortunate district attorney was a member of the Wheatland branch of
Odd Fellows. Members of the lodge, as soon as they learned of the murder, formed
a committee to go to the scene of the crime and recover the body. At risk of
being treated roughly, the committee well performed their disagreeable task.
They met some faint opposition, but finally, on proving that their mission was a
peaceable and a sacred one, were able to remove the remains to their hall, to
rest there till the arrival of the coroner.

Several suspects were arrested by City Marshal C. J. McCoy and taken to the
County Jail in Marysville. On the following morning, Adjt.-Gen. E. A. Forbes,
close friend of Manwell and former resident of Yuba County, ordered Company I,
of Oroville, and Company G, of Sacramento, together with Troop B of the latter
place, to Wheatland, where martial law reigned for several days.

Sheriff Voss was removed to a Marysville hospital, where he was forced to
remain until well into September before reporting at his office. For a time his
life was despaired of; and while he lived for several years after this
experience, his friends contended that his life was cut short by the treatment
he received on "bloody Sunday" at Wheatland.

Through arrests made, and through further investigation, E. B. Stanwood, who
was appointed by the supervisors to succeed E. T. Manwell as district attorney,
learned with the aid of other officers that "Blackie" Ford and Herman D. Suhr
were the ringleaders among the I. W. W. rioters. Ford was traced to Winnemucca,
Nev., and returned on August 18 to Marysville, where he was recognized; as a man
who previously had preached I. W. W. doctrine in the county-seat, Suhr was taken
in Prescott, Ariz.

The trial of Ford and Suhr, together with that of several suspects indicted
by the grand jury for the murder of Manwell, began on January 12, 1914. In the
court-room appeared a number of "sob-sisters," some representing a San Francisco
journal, and some others, members of organizations allied with the I. W. W. The
latter organization rented a house across from the courthouse and established
headquarters there, sending out literature intended to create sympathy for the
men on trial. The jurors chosen to hear the evidence were A. F. Folsom, Browns
Valley; W. H. Finch, eastern Yuba County; A. J. McCarty, Hammonton; C. E.
Stephenson and Frank Platte, Marysville; Emile Picard, who later was one of the
victims, with his wife, in a double murder, mentioned in this chapter; C. E.
Shogren, August Erickson, and Edward Carlson, all of Arboga; R. E. Alderman, of
Waldo; John J. Norton, of Marigold; and W. Bainbridge, of Rackerby. A. C.
Allread, a Marysville blacksmith, was selected by agreement as an alternate
juror, to take part in the verdict in the event of sickness or death of any
member of the jury. Daily attendants at the trial were men well known as active
in I. W. W. ranks. Such as were suspected of being present for ulterior purposes
were closely watched by the officers.

District Attorney Stanwood was assisted in the prosecution of the defendants
by W. H. Carlin, well-known Marysville attorney, who bore a State-wide
reputation as a criminal lawyer, but who always preferred to be on the side of
the defense. It was proven by the prosecution that Suhr had, during the
agitation at Wheatland, sent a telegram to I. W. W. headquarters at San
Francisco, ordering that "more wobblies be sent to Wheatland." A verdict of
conviction was returned against both Ford and Suhr, and they were given life
sentences. Several unsuccessful attempts have been made to secure their parole,
but to no avail. Judge E. P. McDaniel, who presided at their trial, would never
take a part in any movement toward commutation of sentence or parole.

Edward Tecumseh Manwell was a native of Wheatland. He taught school a number
of years in his native county, at the same time studying law. His first
political office was that of Assemblyman; and he served two terms as a
representative from this district, then known as the Eighth Assembly District.
He next was chosen county superintendent of schools, holding the office from
1906 to 1910. In 1910, he succeeded Fred H. Greely, present county auditor and
recorder, as district attorney, filling the office until his death. He was a
member of the Masonic fraternity, as well as of the Odd Fellows, and had served
as a member of the National Guard.

Manwell was survived by his widow and eight children, the oldest being Ray
Manwell, who at the time this is written is himself filling the office of
district attorney. The remains of Edward T. Manwell rest in the family plot at
Wheatland. The funeral procession that proceeded from Wheatland, where the
services were held, to the grave, was attended by people from all walks of life
in Yuba and the surrounding counties.

The conviction of Ford and Suhr has for years caused the I. W. W.'s to give
this section a wide berth. The Wheatland tragedy, it should be added, had the
effect of arousing the people of the State to legislation providing more
definite rules for camps where workers are employed, particularly as to sanitary
conditions, proper housing, water supply, etc. 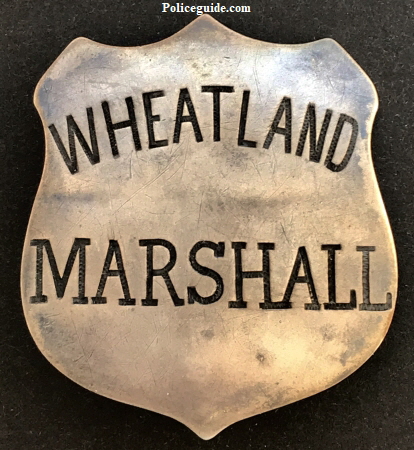 Wheatland Marshall badge made of sheet silver, T-pin and C-catch.  Circa 1900. 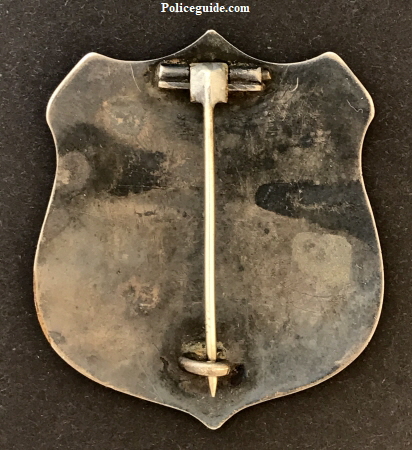