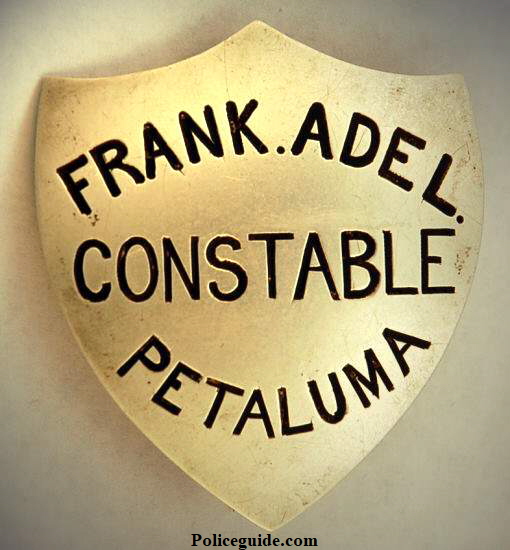 Born 1835 in Pennsylvania
Frank Adel slowly moved west and ended up in California between 1857 and 1860.
He moved to Sonoma County between 1860 and 1863. He probably married Annette in that same period, as it appears that he may have been single while in Butte County, but was certainly married by the 1863 draft registration in Sonoma County.
He was a plasterer at least until 1863. We know from what you have found that he was a Constable in Petaluma by 1866. So, he moved from Healdsburg between 1863 and 1866 and became a Constable.
He had retired from being a Constable by 1880.
It appears that he was dead by 1889, as his wife is listed alone in Forrestville. I can find no record that they had any children.
Research by James Christian

Jim, We have a book here at the Library called Oaths of Public Officials, Bonds, 1854-1894. This is an index to original documents of appointments to county offices, certificates of election, revocation of appointment, appointments of deputies, oaths of office. The dates for Frank Adel as constable of the Petaluma Township are 1865, 1867, 1869, 1873. He was appointed deputy constable in 1872.
The volunteer who tracked this information down is Ray Owen.
Katherine J. Rinehart
Library Associate
Sonoma County Library
History & Genealogy

Jim;
I have found two references to Frank Adel in our collection.

In the 1866 Great Register, the voter rolls, his occupation is listed as Constable, he is a resident of Petaluma, his age is 31 and he is a native of Pennsylvania.

In the 1877 Historic Atlas of Sonoma County his occupation is listed as Constable and Collector, he is a resident of Petaluma. It says he came to the state in 1859 and to the county in 1862.
John Benanti Researcher Petaluma Museum  May 12, 2011.

Petaluma Newspaper - May 24, 1866, Crazy - A man named Abner Heath from Vermont, and who has been working in Big Valley for some time past, was arrested in this city, Saturday evening last and taken to Santa Rosa by Constable Adell for examination touching his lunacy. He was sent to Stockton on Tuesday morning.